Are Baked Chips Healthy? Get the Inside Scoop!

Admit it, whenever you see ‘baked’ written on a chips packet, you automatically register it as healthy! Don’t worry; you are not alone. Once, I was in your place, too, till I got my research done on various types of chips.

As people are getting more health conscious, chip manufacturers made marketing gimmicks to advertise baked or oil-free chips as ‘healthy.’ But are baked chips healthy?

Most store-bought baked chips contain unhealthy ingredients like refined flour and vegetable oils. Additionally, they have high levels of sodium, which can lead to weight gain, headaches, high blood pressure, and other health problems. The best way to make your healthy chips is by baking them in the oven at a low temperature.

If you’re considering adding some baked chips to your grocery list but aren’t sure if they deserve a spot, here are some essential things to consider before you place your order.  Let’s read on more to clear it out!

Are Baked Chips Healthy or Not?

With all the different chips available in the market, it can be hard to figure out what’s good and bad. It’s even harder to figure out if baked chips are healthy or not!

I’m here to tell you that, yes, baked chips are healthy only if it’s homemade, under self-inspection.

While packaged baked chips are often considered a healthier alternative to regular chips, many people don’t realize that they’re not always as healthy as you might think.

So before you pick up your next bag, read on for some facts about baked chips that may surprise you.

Some baked chips contain more fat than their fried counterparts. So, they are not healthy for weight loss.

Even though companies may claim the chips are oil-free, they are not completely oil-free. Some oil or shortening (which could be refined, hydrogenated, or unhealthy in any form) is used while baking.

In fact, some brands have been found to contain nearly two times the amount of fat per serving compared to regular chips. As a result, these baked versions include nearly double the calories.

Are There Any Baked Healthy Chips?

It seems like there are no packaged chips, fried or baked, that can be called healthy.

The sodium content in baked chips is no less than in regular chips. You still get as much sodium to spike up your blood sugar level in no time after eating a bag full of ‘baked’ chips.

Nutritionists say a portion of homemade deep-fried chips is better than store-bought baked chips. Now you know why!

However, that doesn’t mean you should swear off this snack altogether- just be mindful of how much you eat at one time.

The two pictures above show that there is not much difference between the nutritional content of baked and fried chips.

To let you know, both the servings are equal to 28 grams. In this quantity, the classic fried chips have 160 calories per serving, and the baked one has 120 calories (not much of a big deal, right?). 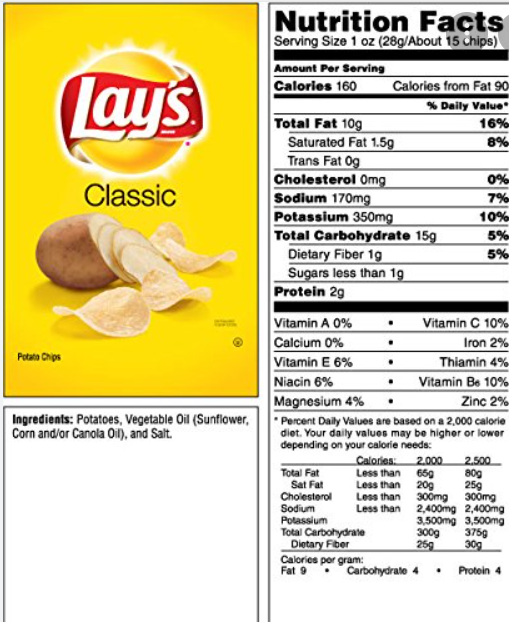 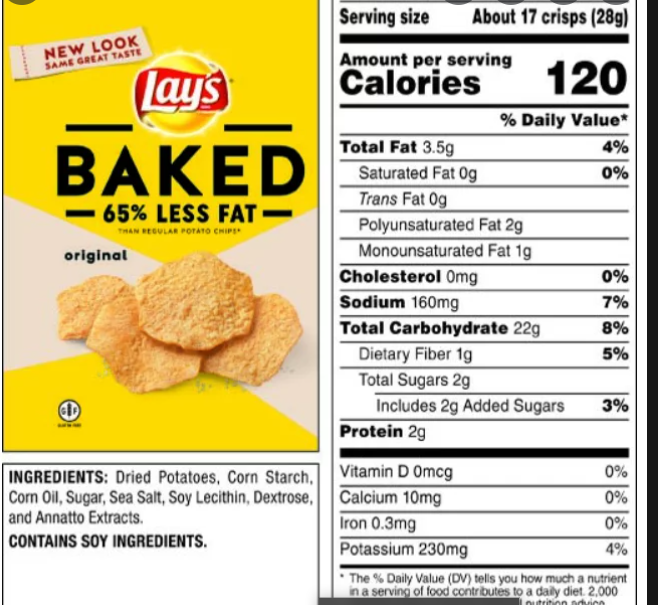 Moreover, the baked ones contain no saturated fats compared to the fried ones, which have 8% fat daily nutritional value. The sodium content of both types is the same, which is 7% of the daily value.

The baked version has 2 grams of added sugar, whereas the fried one has less than a gram. Additionally, baked chips have more carb content (8% in one serving) than regular fried chips (5%).

Here, the idea of comparing both the types of chips from the same brand is to show you in what ways baked chips are a healthier alternative.

To be honest, there are no notable health benefits compared to regular chips! You still feed yourself lots of calories and sodium while munching on baked chips.

Baked chips offer many of the same enjoyable flavors and crunchy textures you love, leaving you with some diseases in the long run if you consume them too often.

Though they may be marketed as a healthier alternative to fried chips, baked chips still come with health risks followed by over-consumption.

Most baked chips are made with unhealthy oils and contain high sodium levels. They also typically lack fiber, protein, vitamins, and minerals (as usual). In return, they can increase your risk for diabetes, obesity, high blood pressure, and heart disease in the long run if eaten in excess.

It’s no secret that chips are some of the most delicious snacks on the planet, but their calorie count and sodium content can add up quickly, making them unhealthy to eat too often. Instead, gear up and make baked chips for your family at home.

So, why should you consider baking your chips at home?

Have Control Over Oil

Store-bought chips are often fried in unhealthy oils, have too much salt, and lack nutritional value. When baking chips at home, you can use healthier oils, such as olive or coconut oil, as your preferred quantity.

Homemade chips also contain less salt than store-bought ones because they’re not pre-seasoned with as much salt to prevent spoilage.

Because you can control what goes into them, you can customize the seasoning according to your liking. If you don’t want salt, you can skip it. If you want to add other spices, you can go on with that too.

Finally, if you are making baked veggie or fruit chips at home, you can hold on to the nutrients by not over-baking them; and you eat them fresh.

As a result, they have at least fewer nutrients left in the chips than store-bought varieties that are entirely nutrient-devoid.

Although making chips at home may cost some time and effort, it won’t cost health. You should never feel guilty about eating them! In fact, there are many benefits of eating homemade baked chips.

The best part of making homemade chips (other than being healthy) is that you can choose any fruit or vegetable of your choice. It could be apple, banana, carrot, sweet potato, zucchini, and many more.

Enjoy the crunch! You can also store the chips in air-tight containers for a week.

Check out all the frequently asked questions on baked chips.

Baked chips are not suitable for weight loss, even though they seem like. There are still significant amounts of calories and carbs that can take over your diet easily. Giving yourself a treat sometimes is alright, but you may want to reconsider if you are continuously nibbling on bags after bags.

Are baked chips healthier than fried?

What baked chips are gluten-free?

If you are gluten-conscious, then to let you know, all baked chips are considerably gluten-free. Chips are usually not made of glutinous ingredients, mainly grains like wheat, barley, and rye. However, if you are making/ buying any kind of bread chips, such as pita chips, you may want to watch out for gluten in them because the bread itself is made from wheat flour.

Can you bake chips without oil?

Yes, you can bake chips without oil if you want. However, there are chances that your chips will stick to the bottom of the tray without some kind of lubrication. If you want to avoid oil at every cost, you can brush a bit of margarin, ghee, or butter on the tray.

Chips have long been a favorite snack food in the United States, and for a good reason – they’re delicious! With names like Pringles and Lay’s, it’s easy to understand why chips are so popular. However, like the rule of nature, tasty things are not healthy!

As far as baked chips are concerned, now you know they are also not beneficial; it’s just the marketing bling! The only healthy way to consume baked chips is to consume them in moderation.

What Does Carrot Cake Taste Like? Delicious or Unpalatable?

Are Rice Noodles Good For Weight Loss? Are They Healthy For You?

Is Green Tea Good for Gastritis? An Ultimate Guide

Is Lemon Good for Gastritis? 5 Worst Effects of Drinking Too Much Lemon Water!

By - Dr. Swathi Kilari
About Wholesomealive