Ibuprofen to Stop Breakthrough Bleeding: Does It Actually Work?

Ibuprofen is a synthetic drug that belongs to the class of NSAIDs (non-steroidal anti-inflammatory drugs) used mainly as an analgesic, a pain reliever against migraine, arthritis (gouty arthritis or rheumatoid arthritis), and against painful cramping during the menstrual cycle. People also use ibuprofen to stop breakthrough bleeding and to get relief from fever and inflammations.

Does it actually work if we use ibuprofen to stop breakthrough bleeding?

If you want to know how ibuprofen works for breakthrough bleeding along with the side effects it causes, keep analyzing this article.

Why does breakthrough bleeding occur?

Endometriosis is an inflammatory disorder of the uterus lining in which some extra tissues (somehow similar to that of endometrium tissue) grow on the outer side of the uterus. Our body gives an inflammation response against this growth by producing prostaglandins.

Prostaglandins are lipid-related compounds produced mainly by osteocytes and work in the inflammatory response of the body.

Prostaglandins also produce estrogen, a hormone responsible for the regulation of the female reproductive cycle. Estrogen works mainly to increase the thickening of the inner lining of the uterus (endometrium) by vascularizing it.

So we can say that when endometriosis occurs, there is an increase in the production of prostaglandins due to the tissues growing on the outer side of the uterus.

As prostaglandins increase, there is an increased production of estrogens that cause the lining of the uterus to thicken greatly. When this thickening increases beyond its limit, the body sheds it out in the form of breakthrough bleeding.

This process can occur at any time instantly without a certain time. This type of bleeding that occurs at any time spontaneously is called breakthrough bleeding.

How does Ibuprofen actually work?

Ibuprofen might help with your breakthrough bleeding. So, here’s the mechanism that will help you to understand its working procedure.

In Case of Normal Women 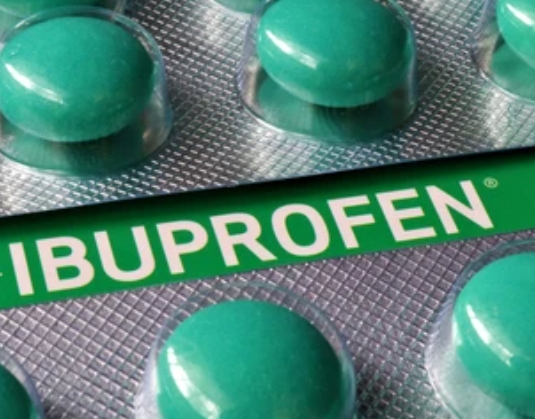 There are various types of birth control pills available in our country. They all work differently. Some pills prevent the fertilization of eggs with sperm by making the mucus of the cervix more thick and hard.

It creates a hindrance for sperms to find an egg in the female reproductive system. The chances of conceiving are thus reduced.

Various birth control pills change the hormonal level of the body, which does not allow the egg to ovulate from the ovary. Some birth control pills affect the thickness of the internal lining of the uterus, reducing the chance of implantation of a fertilized egg in the womb.

In one or more ways, all types of birth control pills prevent pregnancy from occurring by changing the hormonal balance of the body.

The pills which prevent pregnancy by altering the thickness of the endometrium lining and by stopping the egg to releasing from the ovary (due to hormonal imbalance, usually there is an addition of human-made estrogen through pills) cause breakthrough bleeding.

Ibuprofen decreases the production of prostaglandins in the body. Thus, ibuprofen can be used to stop breakthrough bleeding.

The dose must be taken at regular intervals. Try your best to not miss even a single dose in your routine. Precautions must be kept in a measure during the usage of ibuprofen.

Although many women use ibuprofen to control their breakthrough bleeding, it also has a number of side effects. Also, not everyone can use it. So, go through the side effects and contraindications if you are thinking of using it.

Side Effects of Using Ibuprofen

Some Major Side Effects

Major side effects of ibuprofen usage include;

People who do not use NSAIDs are at much less risk of getting a heart attack or stroke than those people who use them. Ibuprofen also belongs to the class of NSAIDs, so it also increases the risk factor of heart strokes.

Besides all other functions of prostaglandin, it also controls the amount of fluid entering and leaving the kidney for filtration. If prostaglandins are absent or less in the body, it will disturb the fluid balance, causing kidney problems.

As the kidney loses its function, it leads to many other issues including high blood pressure, frequent urination, etc. It can also cause dehydration and weakness in the body.

Ulcer In Stomach And Intestine:

Walls of the stomach and intestine get ruptured due to the continuous action of stomach acids on the stomach wall and that of duodenum acids on the intestinal wall. Prostaglandins play an important role in recovering of walls. As Ibuprofen decreases the amount of prostaglandin

In the body, it is increasing the risk of ulcers in the stomach and intestinal walls.

Some other side effects of ibuprofen may include:

In short, if ibuprofen shows its side effects, then it can nearly damage each organ including the kidneys, stomach, heart, and even eyes.

Although these side effects are serious and major, they occur very rarely.

Ibuprofen is not allowed under some specific conditions. These conditions include:

This medicine is not for if you are pregnant. If you have faced any kind of surgery including dental surgery then you must consult your doctor.

Persons who drink alcohol are at more risk of getting its side effects as compared to those who don’t drink. Old people should not use this drug in a higher dose or for a longer period.

If people drinking alcohol and all other ibuprofen sensitive persons take ibuprofen for a longer period of time, then severe reactions can be produced in their body.

For example, holes or ulcers can occur in the stomach and at any part of the intestine due to the overuse of ibuprofen.

A person who is taking anticoagulant drugs should also consult his/her doctor before taking this medicine.

Even if you are taking any kind of multivitamin or some other supplements, including calcium supplements, you must inform your doctor before taking ibuprofen.

Question: Does a high dose of ibuprofen cause damage?

Answer: As ibuprofen has its own side effects, so its high dose can cause damage to the kidneys, stomach, liver, eyes, heart, and many other organs of the body. But these disorders occur rarely.

Question: How to take a dose of ibuprofen?

Answer: Ibuprofen must be taken with a frequent amount of water. Try not to lay down for at least 10 to 15 minutes after taking a dose of ibuprofen.

Always follow the prescription for that drug and if you have any kind of disorder, first consult your doctor.

Answer: If you are using ibuprofen during menses, then it lessens the amount of bleeding.

Question: Can ibuprofen be used for the long term?

Answer: Ibuprofen cannot be used for a long period due to its diverse side effects.

Answer: Yes, breakthrough bleeding can occur naturally. It occurs due to the over-thickening of the lining of the uterus.

Question: How normal menstruation and breakthrough bleeding can be differentiated?

We can use ibuprofen to stop breakthrough bleeding, but usage of ibuprofen can cause serious issues. It works by changing the body’s normal functioning as it alters the hormonal balance in the body.

High dose and continuous use of ibuprofen definitely alter your normal life activities, and it can be life-threatening.

Dicyclomine vs Hyoscyamine: Which of Them Is Better?

Seroquel 25 mg Weight Gain: How Does It Cause Gain In Weight?

Wondering if You Can Take Amoxicillin on an Empty Stomach? Here’s Your Answer.

By - Dr Hafeez Arshad
About Wholesomealive