Is Soy Milk Good For Diabetes?

Soy has earned a reputation as a health and wellness buzzword. Wherever you go, be it a yoga class, a supermarket aisle or a health blog online, you’ll find people preaching the divine qualities of the miracle food that is Soy. You’ll find soy everywhere from the staple Soy sauce to Tofu to meat alternatives to soy supplements and the thing you’re here for, soy milk. So what’s with all the hype? It’s because soy has heaps of natural plant protein and some other tricks to boot.

So soy is good, eat soy right? No mystery here. But hold your horses. There are lot of things you need to know before you start stocking your pantry; especially if you’re diabetic. So in this article, we’ll dive into all there is to know about soy and give you the insight you need. We’ll give you the details about if you should take soy milk or other soy products if you’re suffering from diabetes and how it can help. So let’s get to it.

If you’re the only person on earth who’s never heard of soy, don’t worry we got you covered. Soy comes from Soybean which is grown worldwide. It’s origin can be traced back to 7000 BC where it was domesticated in China. Since then it has become a staple in Asian history and culture. It is widely seen in Chinese, Japanese and Korean cuisine because of its long history in those cultures where it has been grown over several millennia.

Soybean is grown around the world. The top producers of soybean are Brazil followed by the United States, Argentina and china. It has a huge number of applications, the most important being soybean oil, which is used as edible cooking oil. The obvious use as food aside, soybeans are also used as animal feed and fertilizer.

The nutritional information for 100 grams of green soybeans are as follows:

Soybeans have very low saturated fat and high amounts of protein. Besides this they also contain:

The nutritional properties of Soy depend on the variety, condition, processing, method of preparation, etc.

Soy is a very nutritious food as we’ve already seen. So the first benefit of soybean is that it provides a good amount of plant based protein. Our diet usually consists of animal meat as the principal source of protein. This can be problematic for a number of reasons.

Soybean has also been found to be helpful in preventing different cancers. Studies have shown that intake of soy products can reduce the risk of gastrointestinal cancers and also have protective effects against prostate cancer. Soy is also high in fiber, which is known to lower the risk of colon cancer. Besides this, Soy appears to be beneficial for fertility.

Soy contains estrogen-like chemical equivalents called isoflavones that have shown qualities like improving fertility and reducing hot flashes in women. Recent studies have also found an interrelation between soy intake and reduction of levels of bad cholesterol. So soy might even be good for your heart.

At the end of the last century, soy was really taking off as a wonder food. As the production of soy boomed and sales of soy products were at their highest ever, different reports appeared claiming that soy was responsible for various health risks, Some concluded soy could activate genes that may cause cancer, their isoflavone content could hamper the body’s natural hormone balance and cause an overload leading to female infertility.

The initial studies were so shocking that they sent shockwaves throughout the whole industry. But later these studies were found to be flawed and questionable to say the least. But the damage had been done, soy became the central point of mass dietary confusion.

Many people still are afraid to try soy because of it’s tainted reputation. But research has now shown that soy is indeed beneficial. The moderate consumption of minimally processed products of soy can be greatly beneficial for health. This is why soy is once again on the rise today, as more and more people are embracing soy as a proper health food and incorporating it into their diets.

Soy is highly regarded as a perfect health food because of its nutritional value. It contains abundant stores of plant protein that is very ideal for those who want an alternate source for animal protein like vegans. Plus, foods like tofu can have a very similar texture and subtle flavor profile making them ideal for replacing dairy products like heavy cream and cheese.

Soybean is processed into a wide range of food products. Just some of the uses of soybean are as follows:

Among the above forms of soybean, by far the most common is Soybean oil, which is an excellent edible oil used for cooking, Tofu is also very popular in asian cuisine for it’s smooth texture and taste and is used extensively.

Soy milk is a non-dairy milk alternative made from soybeans. It is healthy, nutritious and not to mention delicious. Soy milk is very popular because it is the closest plant-based alternative to low-fat milk, bringing with it the many benefits of soy. It also is chalk full of natural phytonutrients and plant protein that sets it apart from other cow’s milk alternatives on the market. 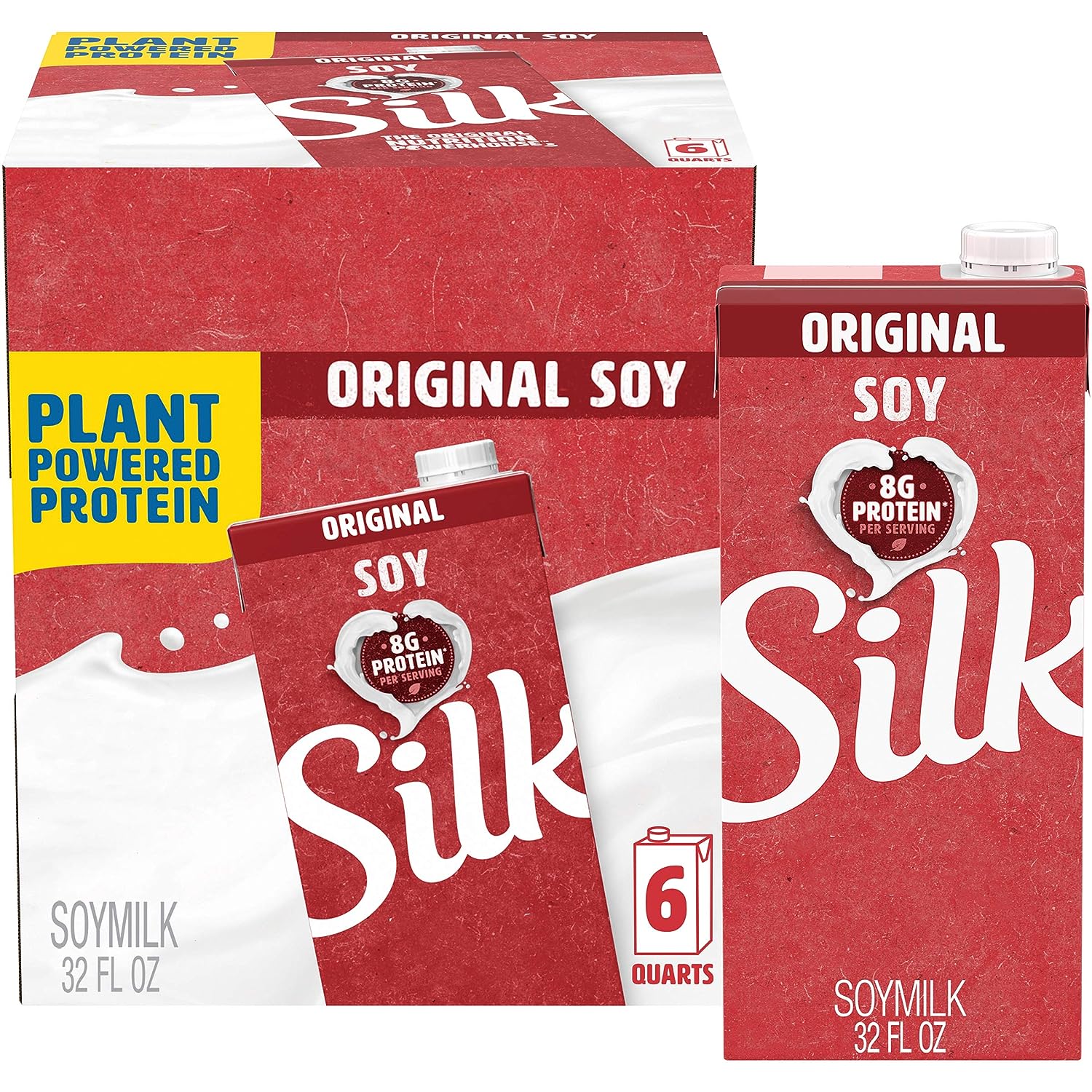 It is especially suitable for people looking to avoid milk for health or weight-related problems. Many people are lactose intolerant, that means they cannot digest lactose present in regular milk. Soy milk is a wonderful second choice as it contains higher amounts of essential proteins than any other form of non-dairy milk.

Soy milk is easily the most nutritional milk alternative on the market. The exact nutritional constituents differ from brand to brand so be sure to cgeck the packaging.

The nutrition facts for one cup of organic soy milk are as follows:

Comparing all the plant-based milks on the market, it can be seen that soy milk is the one most similar to low fat cow’s milk. It contains all nine essential amino acids as well as very low amounts of saturated fats, making it very healthy.

Milk is a very important whole food. That means it contains all necessary nutrients required by the body in adequate amounts. So diabetics especially require milk and dairy products as they have to moderate intake of other foods to control carbohydrate and sugar levels. Full fat or full cream milk is a big no in this case as they are high in fat, which may cause atherosclerosis. An excellent alternative to this is soy milk.

Soy milk has high protein, fiber, minerals and vitamins but very low in saturated fats. Making it ideal for losing weight. In addition this, recent studies have found relations between isoflavones in soy and re-sensitizing of insulin receptors. This could mean that soy could essentially improve the effectiveness of insulin and thus reduce diabetes.

So soy milk can be a great option for diabetics. But with everything, moderation is key. Two to three servings of soy milk should be enough for maintaining protein intake. Taking more could add excessive protein and carbohydrates that could cause dietary imbalance.

How do you use Soy Milk?

Soy milk tastes great but itself but there are many ways you can incorporate it into your cooking and diet. Soy milk can be used as a substitute to regular milk in most cases. So you can use it in cooking, baking, beverages, etc. Here are some great ways you can use soy milk in your cooking:

You can find thousands of recipes online showcasing how versatile soy milk really is. So go ahead and try out your favorites!

If you’ve read this article till the end, you now know the immense benefits that soy brings to the table over other kinds of plant milks. Especially if you’re a diabetic and you need to maintain your weight, there is no better option.

We hope this article has helped you find the answers you needed regarding soy milk and diabetes. So try out soy milk and step into a world of better health and wellbeing.

As a doctor in the making, I feel fascinated by the advancements and expansion of medical science. This fuels my passion for trying to follow a health-conscious lifestyle. I love writing and sharing thoughts and ideas with the people I care about. If my work can reach out and help people to enjoy a healthy, happy life it will be an honor for me. Muhtasim Munir MBBS (3rd year) Armed Forces Medical College