Affiliate Disclosure
Wholesomealive.com is reader-supported. As an Amazon Associate, we earn from qualifying purchases.
Diabetes Care

Although there are a lot of good options these days, digital glucose monitoring still hasn’t reached the level of precision. That’s a real bummer.

With that said, there are skeptics who probably won’t even pay attention to this review.

But as a diabetic, you should probably read this whole article if you want to know why we are with a short review of the Dexcom G5 vs G6. It’s going to help you in a lot of ways.

Continuous Glucose Monitors or CGM are becoming established among people because of the level of functionality it offers. Still, the inadequacies are still dominant because of a fair number of variables.

Still, new technology is coming out almost every quarter. With that, improvements with accurate measurements in medical devices are also seeing the light.

And that’s where the G5 and the G6 come in. Both of these solutions are pretty well established among customers. Also, they do measure glucose levels comparatively well than some of the existing options out there.

So, we’ve put the G5 and G6 to the test. Throughout the comparison, we’ll remain as unbiased as we can, for all your sakes.

In return, all we want for you is to stick with us until the very end.

The Dexcom G5 is pretty easy to handle overall. All you have to do is punch the sensor anywhere on your skin (we believe you know which space would be better). Then you push on the plunger to insert the cannula. After that, just push the transmitter on to a place.

One of the main advantages of the G5 is the fact that you don’t need any needles. All you need to do is pull out your receiver. Then you can check your current glucose levels. This is very neat considering you can monitor the glucose levels anytime, anywhere.

Learn about the glucose level predications

The glucose level graph is another great indicator to let you know of the levels you need to be in. It’s a great tracker that allows the user to maintain optimal levels at all times.

Another great advantage is the smart sensing and alert capabilities.

The Dexcom G5 can alert you if you are getting closer to the threshold glucose levels. You can either set a tone or put it on a vibration mode if you feel like it.

The G5 is capable of telling you your blood sugar levels via your Apple Smart Device. Although it’s not that big of a deal, it’s still noticeable as the integration is pretty seamless.

The level of comfort isn’t that great

The G5 doesn’t allow you to be comfortable right away. It feels unnatural.

No love for android

If you have an Android Device, then working with the G5 is a huge problem. Because there’s no support for the Android operating system!

The Dexcom G6 is pretty much like an older brother to the G5. But the only difference is that its better in many ways. 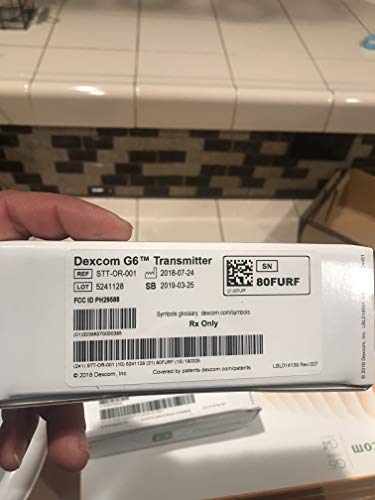 What we liked about the G6

You won’t be needing a fingerstick anymore. The G6 comes factory calibrated, which is a far better bargain.

A single-button applicator with a longer time-frame

The single button applicator feels much better and doesn’t give you much pain. Also, the 10-day wear is another good thing that allows fewer insertions and warmups.

These things combine together to offer good overall comfort.

The accuracy is right on point

The G5 and G6 are pretty much similar when it comes to relative accuracy. During our checks, the deviation margin was somewhere between 0.03 to 0.07%, which is certainly acceptable.

And, as an added bonus you don’t have to worry about any Tylenol interference.

A slimmer transmitter with support for both Android and iOS

The body of the G6 is a lot less slim than the G5, which makes it a handier device overall. This also allows for easier handling.

Also, having support for Android is clearly a major upgrade. Users will now be more into this device than ever before!

Another key upgrade is the low threshold alarm, which is one of the reasons for people to buy this product. If you need to reach 60mg/dl within the next 45 minutes, then this intuitive system will let you know about it without fail.

There are some initial calibration issues. You may have to work with the passcode rather than the photographic scan if you’re unlucky.

The G6 now has a smaller interface, where now you won’t find some of the previous options.

Once you start the G6 there’s no way of calibrating or restarting it for the next 10-days. So, be mindful of that.

If we were to give a judgment on these two options, then you should know: we will not be taking any sides in this Dexcom G5 vs G6 discussion.

The G5 though an older generation, has a lot of good features to talk about. It’s got good calibration and sensitivity. As a CGM device, it meets the standards without a doubt.

But the level of discomfort during the initial period is certainly noticeable. Not only that, having no support for Android devices is an obvious deal-breaker. And it’s one of the very reasons you may want to consider its bigger brother.

The G6 comes with a couple of enhanced features, which it got from its younger brother the G5.

The sensor is much smaller and easier to handle. Also, it eliminates a lot of the wear and tears you would need with the G5. And the Android usability earns some extra points. Furthermore, the Low-Soon Glucose indicator is a great addition as well.

But the fact that it doesn’t come with any recalibration window is a bit of a bummer.

Overall, we find both devices to be capable, with a few extra points to the G6 for its versatility.

We’ll let you make the final choice. Until then, Goodbye.

Rapid Weight Loss After Hysterectomy: The Causes and Execution

Keto Mojo Review: A Complete Testing Package for the Diabetics

This is Dr. Hafeez. I have done my M.Phil in Pharmacology. I am a healthcare professional. My core competencies focus on writing different types of research articles/blogs regarding health sciences.

We will be happy to hear your thoughts

Wholesomealive is an online healthcare media publishing website. Our mission is to provide easy to read and in-depth medical information. Read More